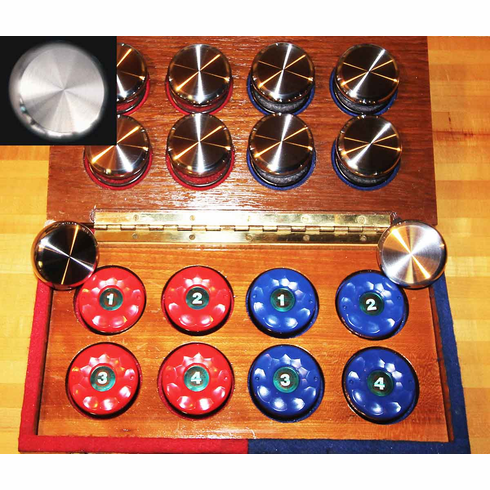 Pro Series Shuffleboard Weights® (sometimes referred to as shuffleboard pucks) are designed to provide consistently superior performance on any type of playing surface, including lacquer and polymer finishes.

In order to achieve this, every set of Pro Series Weights® is individually hand-polished, twice, and then speed tested. Any weight which does not meet the very strict test criteria is re-polished and re-tested until all eight weights are equal in speed.

Other brands of weights have variances of several feet between the speed of the fastest and slowest weights in a set. Once a set of Pro Series Weights® has passed inspection, it is assigned a serial number unique to that set. This number is then engraved on the top of each weight in the set, underneath the caps.

Pro Series Weights® are the most widely used weights in the competitive shuffleboard world. They are the number one choice of top players and serious amateurs alike, and win more than three times as many tournaments as all other brands combined.