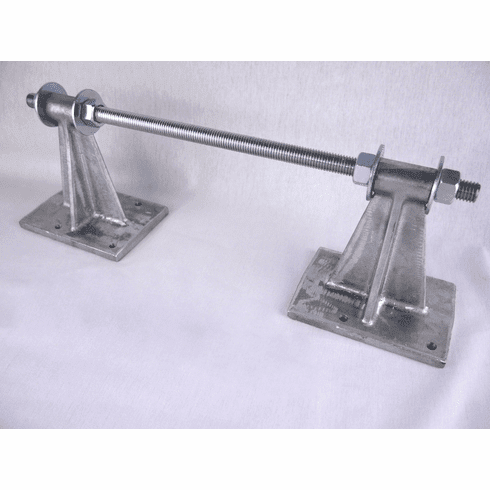 Purpose: The playing surface (playfield) of a Shuffleboard Table is made of wood and will change to its climate. More humid will cause the playfield to expand and dip and become more concave. Drier conditions will result in the playfield contracting, and becoming convex, or "high centered". Climatic adjusters are used to create ideal the concave shape of playing surface.

Depending upon length of table, number of adjusters will vary but tend to be located approximately every 3 or 4 ft along underside of table, beginning one foot from each end of board If too concave, weights (pucks) will take an "S" path down the board. If too convex, weights will be difficult to cross the center and will dump off the rails into the gutters.

Steps: Before climatic adjusters are used to level the playing field itself, it is imperative the cradle is leveled first Using a traditional carpenter's "bubble" or laser levels, ensure the board is level along both its length and width. This is achieved by making small turns to the "feet" of each leg, raising or lowering to desired height.

How to adjust: Each adjuster contains 4 nuts, an inside and outside nut on both the left and right sides of long bolt/bar running along the table from left to right (I-beam). To obtain a more concave table (lower center and higher rails), the inside nuts need to be tightened to create more tension and raise the edges of playing field. To flatten and make the playing field more convex, the outside nuts on the bar need to be tightened to lessen the tension and lower the edges of board. Regardless of whether you are making an adjustment to make your table more concave or more convex, the inside and outside nut on one side of the table should be tightened against each other. This will keep the rod from spinning when the adjustments are being made.

History: Until the late 1940's, Shuffleboard Tables were sold without Climatic Adjusters, and it was difficult to maintain optimum playing conditions. Paul Cusano, president of American Shuffleboard Company, created his "Warpage Correction Device" in December, 1947, and applied for a patent thereon, this device being marketed by the American Shuffleboard Company as "Climatic Adjusters" - Patent Number 2.479.477 - lever-type adjuster. In November of 1948, Rock-Ola created and marketed its similar device, known as "Rock-Ola Climatic Equalizers". 1948 - Involved in legal battle with Rock-Ola Manufacturing on lever-type adjusters. Then awarded new patent No. 2,493,620 in Jan 1950, to cover design of bar-type adjuster.

The introduction of Climatic Adjusters created the opportunity to keep the playing field consistent much quicker and cheaper - easy correction to warpage due to weather with just the use of a wrench. Official Gazette of the United States Patent Office, Volume 650, states "Climatic Adjusters - the word "adjusters" is disclaimed. For Manually Operated Adjustable Brackets adapted for Attachment to and for Use in Leveling Game Boards. Claims use since Aug 26, 1949." By January of 1950, climatic adjusters became standard equipment on every American shuffleboard sold, and were also available for purchase, to retro fit older table, for the price of $18.

Kelly Cameron, son of shuffleboard legend Rod Cameron, has been playing shuffleboard for the better part of 35 years. He has been rated as a professional shuffleboard player for approximately 25 of those years. Kelly is a 3-time winner of the Pro Singles in the prestigious North American Shuffleboard Championships held annually in Reno, Nevada.

Kelly began adjusting boards approximately 30 years ago. He routinely adjusts boards within his hometown of Houston, Texas and surrounding areas. Most notably, he spearheads the crew responsible for board maintenance at the aforementioned NASC. This team insures all 32 shuffleboards are adjusted to prime playing conditions for this 10-day long tournament.

Kelly states, "A climatic adjuster is a mechanical device unique to shuffleboard only. It's primary function is to control the contour of the playing field of the board from it's left side to right side. A long bolt runs thru the bottom of two hangers bolted to the bottom of the board, with nuts on the inside and outside of the long bolt."